The School of heroines and heroes 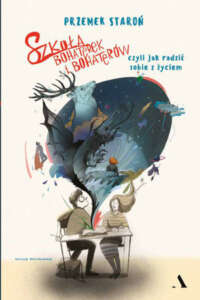 Vol.1 How to deal with life.

Teenagers don’t have it easy in life. Challenges at every corner. Przemek Staroń is coming with support!

The 2018 Teacher of the Year, psychologist, ethics and philosophy teacher, nominee for the Global Teacher Prize, or „teacher’s Nobel,” Harry Potter, and Lego fan gathered questions and concerns from that young people face.

Is it wrong to be sad? Is it worth falling in love? How do you endure failure? What happens if I stand out? Why is an appearance so important? He then answered these questions – based on his psychological knowledge and the stories of characters known from books and movies. They include characters from „Harry Potter,” „Lord of the Rings,” „Stranger Things,” „Star Wars” and the Avengers.

„The School for Heroes and Heroines” is a psychological guide, which reading feels like an adventure novel!

The texts are complemented by illustrations by Marta Ruszkowska, full of imagination and freedom. All this gives to young readers, their parents and teachers gain not only a guide to contemporary culture but also a source of inspiration and encouragement to think creatively in search of their life path.

This book, like Przemek Staroń, is a phenomenon in Poland. No one has come up with the idea of a guide for teens before that combines pop culture, literature, Netflix series, and games with psychology and philosophy. And it is read by young people as well as their parents, grandparents, guardians, and, last but not least, teachers whom Przemek Staroń inspires.

In the second part of the „School for Heroes and Heroines”, Przemek Staroń proposes to rise to a higher level of studying life. Although the two parts can be read independently, the book is designed to be an expansion of the first part. It touches on more difficult topics, such as shame or jealousy, focuses on issues related to building self-esteem, recognizing and defending against manipulation, meeting others’ expectations at the expense of one’s authenticity, and practicing assertiveness.

The book will not lack references to the modern cultural canon. There will be Alice from „Alice in Wonderland”, Pippi, characters from „Lord of the Rings”, „Harry Potter” saga, and Narnia. Neo from „The Matrix,” Mr. Kleks, Enola Holmes, and characters from „Fantastic Animals” will also make appearances. There will also be personal stories from the life of Przemek Staroń and his students.

As in the first part, the texts are complemented by imaginative illustrations by Marta Ruszkowska. As a result, young readers, their parents, and teachers will not only gain a guide to contemporary culture but will also find in Przemek Staroń’s book a source of inspiration and encouragement to creative thinking in their search for their path in life.