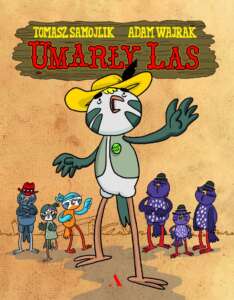 There is a place somewhere in the Wild East called Dead Forest.

When the new sheriff arrives, the three-toed woodpecker Triko, everything seems to be fine. White-backed woodpecker Blekoto, as usual, sells larvae in the saloon, the great spotted woodpecker Kapral runs a seed bank, the pygmy owl organizes funerals, and the bark beetle digs out their corridors.

However, Triko quickly realizes that the peace in the Dead Forest is only apparent. In addition, sneaky starlings appear in the Wild East. Will Triko manage to restore order in the Dead Forest? Will his shameful secret come out? Will he gain the respect of the birds and the love of Trida? Finally, what about the bark beetles?

On the breaks of the comic book stories, Adam Wajrak tells anecdotes from forest life, illustrating them with his photos.

the starlings threw the woodpeckers out of Dead Forest in the Wild East. Living in a clean, commercial forest is terrible for them. They miss hollows, rot, and decomposition. But the compromised Sheriff Triko is not going to give up! He has an idea of how to get the starlings out of the Dead Forest and enable woodpeckers to return home. He will be helped by the brave woodpecker Trida, the crazy blacksmith Bargiel, a gang of owls, and… the bark beetles. Will they manage to complete the plan together?

Vol.3 THE CALL OF CARRION

The carrion appears in the forest… and it causes great chaos. The brave sheriff Triko tries to get the situation under control and asks for help from surprising allies…